Of mice and men by John Steinbeck

Innledning
The years before World War I, the economy around the world was mostly stable. Economic crises did occur, but they were never long lasting. In the interwar years there was a crisis that would last for a long time.

The economy could still go well for periods, but they did not manage to get the economy right during that period. The economic crisis is also called “the Great Depression”

It was an economic downturn that hit the world. Many believe it started when the crackdown on the New York Stock Exchange took place in 1929. The end was rather more different from country to country, but when the Second World War started it was seen as the absolute end point.

This was because many of the countries involved experienced economic growth.

Utdrag
As the only women in the plot, Curley´s wife was a prime example on how women were seen at that time. She was never the nicest to be around. very often would you find her picking on those she found weaker than herself.

In the fourth chapter, you will find her insulting Lennie, Candy, Crooks and even her husband Curley by calling them cowards. She was never afraid to speak her mind, and she often would wear bold clothing. Curly hair, a face full of makeup and shoes with feathers was something you would see her wear on a daily basis.

Curley`s wife would always be described based of her looks and not her personality. She is often described as an object or Curley’s possession. This can be seen when Candy introduces her to Lennie and George as” Well, you look her over, mister.

You see if she ain't a tart.” The men on the ranch described Curley´s wife as “tramp” and “whore” when speaking about her.

Her “American dream” was to one day be in a movie and live her life as a superstar. She wanted the Hollywood life that could bring her money, fame and satisfaction.

This is because she once met a man who said that he could give her that life, but unfortunately, she never heard back from him. You can almost say that she lives in a fantasy world, believing one day that she will get away from Curley and move to an exciting and more dazzling lifestyle. 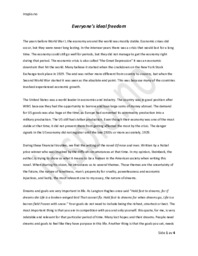